My twitterbot that you can se at http://twitter.com/i_am_larsulrich has been running for a while now.
Right now there are 115 followers (and I’ve done no advertisement at all) but what is more fun is the 12 759 tweets, all of them with the same profane word.

FUN-Y if you ask me!

Gizmodo has a competition in witch you can win an iPad. All you have to do is design something awesomely good looking or embarrassing. I went for embarrassing 🙂

Faked signatures of people that died before the iPad was revealed, and two guys from Microsoft. 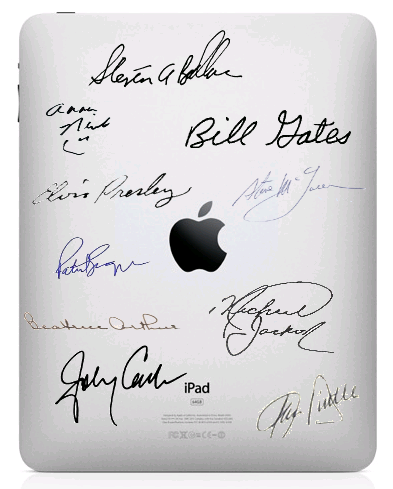 On the side I make VST plugins, I publish a few of them on a site called shuriken.se. A few years back I though that this would someday be my main source of income, but thankfully I did not quit my day–job to work on it fulltime.
I have asked for donations in the manual and lately in the plug’s user interface, I though I was going to get donations enough to buy a little hardware here and there and I hoped to be able to buy something nice for myself now and then. As you all know being into making music cost’s a lot.
However, while I think I have had success in getting popular with my plugins, being on the cover disk of at least ten issues of different magazines both in Europe and Asia and 92259 downloads March 20th 2010 I have received 100 US Dollars in donations. 50 of those from one guy, the rest from about five, six other, all donating 10 USD or similar (100 SEK, 10 Austrailan dollars etc).

What I’ve noticed is that users don’t read manuals, they don’t even care if you don’t write one. And no matter how the graphics for your UI looks it’s always ugly to some. Perhaps because the plugins are free or pretty self-explaining the manual is not needed? I don’t know. I don’t really know why I’m telling you guy’s this. There are a few small developers that are making a living of making VST’s but I’m not gotta be one of them. Perhaps iPad fart applications?

Here are the numbers of the downloads I’ve parsed out of the server-logs, at the bottom is the calculation of how much I’ve received donations per download for.

One thing that American movies and TV-shows tells us is that if you tuck your kids in at night, you’re a good parent. If you take the time to sit a little at the edge of the bed and then sigh a bit, you’re a great parent. If the other parent stands and looks at you from the door frame  you’re awesome.

I’ve reached great loads of times, but awesome only a few times!

BitTest is a sweet little bitcrusher VST, it converts your data to 8 bits, then you can turn the bit’s off (the top row) or invert them (the bottom row) individually. That is you can individually flip and invert the bits.

Get this VST and more over at www.shuriken.se where I publish my VST’s

Ohh, and there is an audiosample here

I thought it would be fun to make a mockup of my future (way future I hope) gravestone. And have comic sans (the font) as a font.

This would be sort of a last prank from me, and pretty funny, don’t cha think? I mean, the ones I know still living would give it a smile every time they saw it, I think.

The sad thing is, they already exist. And not in my fun cheek in tounge loving sort of hipster way, they are real! This scares me and makes me sad at the same time. Have a look: Hooray, today I turned off my win32 machine that I have in the basement. I’ve been using it for mail, since I previously been to lazy to move the mails from one computer to another. I’ve also used it for instant messaging, but that to, is no more. And I don’t think I’ll compile my VST’s for win32 as long as no-one pays me explicitly to do so.

It feels good to be free!

I made another pedal, a simple feedback loop chain thingy. Basically it loops the sound back so it’s a sort of short-curcuit, but you tunnel the sound through another pedal (or several) to get new and exciting sounds from your old and dull pedals.

Here’s a link to a feedback loop pedal schematic: http://experimentalistsanonymous.com/diy/Schematics/Buffers%20Switchers%20Mixers%20and%20Routers/Feedback%20loop.gif

Doing a pedal like this is so much easier then trying to put your guitar’s mic close to the amp, and besides, you can use it with other stuff then your guitar. And you have one knob, one knob to limit the amount of feedback.

The box I built my stuff into accidentally lost the flower it had on it, so I substituted it for a picture of Deadpool.

Here are some pictures 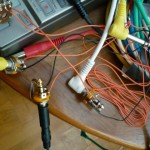 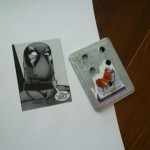 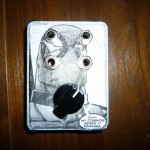 Monday the 8th of March will go to history. It’s also the day when I sent away the “get RITCH QUICK!” CD to CDBaby for ripping and uploading to Spotify/iTunes etc.

If you have no idea what I’m talking about, it’s because you have not read http://www.larsby.com/johan/?p=513. I’m trying to use to get rich!

Now all I have to do is to wait, then play continuosly, then wait, then see if I make any money. right now I’m 60 usd or so back on the whole thing.

http://www.cdbaby.com/cd/GetRITCHQUICK is the CDBABY url, they are probably sending this to iTunes and spotify (and rhapsody, and napster etc etc) right now.

So what shall I do with all the money?!?

Me and Petter started a band a while ago, or rather Petter started it while drunk and told me via SMS. Fair enough, I like starting bands. This time however it actually amounted to something. Part of the band-starting thing was to play before Golden Rocket Pony. That did not happen, thankfully, since they play food-punk and we play noise. And the venue they where playing where so much more food-punk then noise.

I played one of the first songs for Tova, she’s 7, and I asked her what she though we should name ourselves, she listened a little bit more to the music and told me that “Gris fis” was a good name. So I told Petter, he agreed and translated it, since we’re aming for world domination. or whatever.

I’m embedding songs here, Petter has uploaded them to youtube