Ok, so I went to bed at about 12, but my wife has to get up at five in the morning didn’t want me to read in bed. So I went downstairs to read for a while.

I thought the dog was to loud when she was drinking water out of the bowl until I went to check, the kitchen tap was busted and wouldn’t be shut of.
So I turned of the water to the who building and sent an sms to my wife telling her what had happened (I was to tired to get pen and paper). At about three in the morning one of the neighbors thinks it’s a good idea to start a party, so he carried all his speakers outside and started blasting music. I didn’t wake up until my wife went up to close the door and go to the bathroom. I went downstairs to the basement to turn the water on so she could wash her hands. Then I turned it of again and tried to go to sleep. but it was to hot (because we had to have the windows closed) so I couldn’t go back to sleep.
at about four thirty I went downstairs and fell asleep on a hard kitchen-couch. then I woke at nine from Lukas sitting on me.

I tried to fix the kitchen tap with a new replacement tap that I had from before (I was gonna change it anyways) but all I managed was to make it leak into the basement.

So I put that on hold and went with the kids to the auto-shop, you see, they replaced the fuel-pump last week, but this Monday when I filled the tank I noticed it started to leak. Yup, a leaky gas-tank, not good. So we went there so they could fix whatever made it leak, and we got a loaner.

I called my father in law and he came buy and helped me fix the tap, he has bad knees and bad back so I made it all to his instructions, it worked really well. Thanks Krister!

Then in the mail the stuff I’ve ordered for my CNC build had arrived, so we took the loaner to the first of the two places the post should be at. They had summer hours so they don’t open until 15. They didn’t mention that on the note. So we went to get the second package, witch it seems also was at the first place we went, but they forgot to mention that on the slip. retards. So no CNC stuff yet. I also checked, and they have tried to deliver it to my house (they say) but I was not home (they say) and that is true, for one of the packages. The second package I really was home. I even think I saw the delivery guy, but he did not ring the bell. Not that he had had to, the door was open. But he obviously didnt want to get of his fat ars.

So now I’m using this here blog as therapy to calm down. Not easy to do when your tired and have a fuse that is about 3 mm long. But I’m trying. soon it will be 15 and I’ll try to get my stuff (again)

First of though, I’ll write a little list of what’s wrong with my car:

The gas tank is leaking.
The fan only has off/on but there are 0,1,2,3 and 4 on the dialer.
The red paint is pale.
the passenger door has a bolt that has went through it so it wont stay open when you open it, instead it just flaps.
The front door flap issue has affected the hull so it’s a bit bent.
The same started to happen on the driver-door, so i ripped a piece of the splicer of.
The driver window is hard to pull down since a unfortunate accident Gange had when driving in reverse.
The shotgun passengers window lever comes of all the time.
The blinkers and some of the other electricity wont work unless you have the key in the exact position, the engine does not care about that though, you can rive anyways.
Last year when I tried to fix the paint with wax it got stuck on the windows, in the corners, that haven’t come of yet.
Under the registration at the front, part of the car body is loose.
The back registry-sign is bent, Tova had a thing for bending it when she was a kid.
It’s always dirty on the inside.
There is no cup holder.
There is no AC.
It has no acceleration left in it.
Varios dings and dents in the body.
The window wipers back work, but the window wiper fluid has stopper working there.
Some thing for the weels are a bit loose, so sometimes the wheel feels more like a pneumatic hammer.
A light in the back is out.
It drinks oil like crazy.
That’s from the top of my head only, I’m sure I forgot to write loads more.

And I still haven’t packed for the festival I’m going to tomorrow.

a selfmade circuit a boss rc-2 and a korg monotron was seriously harmed today when I decided to make this little tune:

In the wait for my CNC-parts to show up, I tried my make a lot of holes approach to make a screen-print stencil.

First of a picture of the paper that I printed the motif on and later used as a guide for the drilling of the holes in a plastic oh paper. 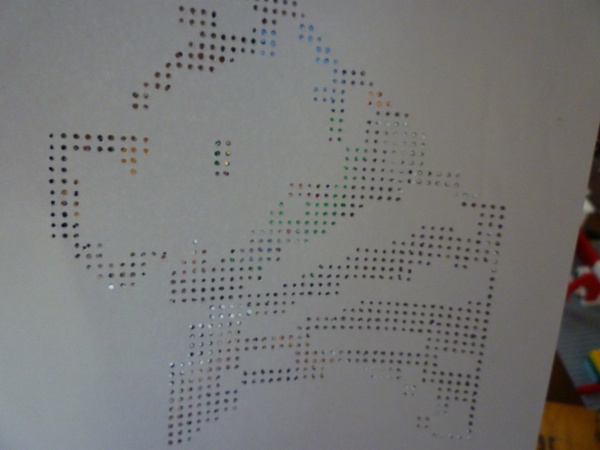 Paper with the holes drilled

This is just an image of the plastic put down on the t-shirt, the red is from a print I did with this on a black t-shirt just before. But the red paint was old. 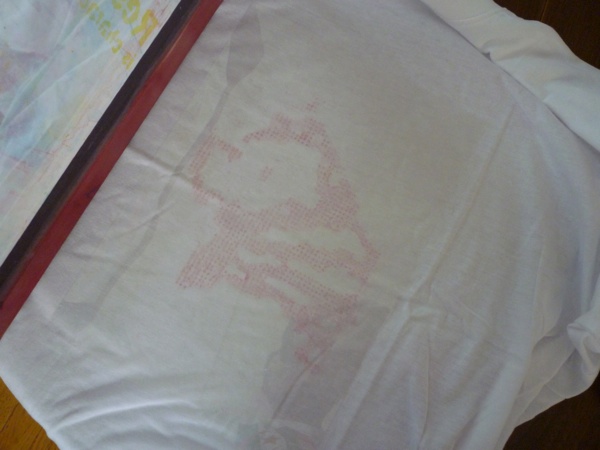 Putting down the helper frame, as you can se there are the remains from a few old prints me and or my wife made over the years. 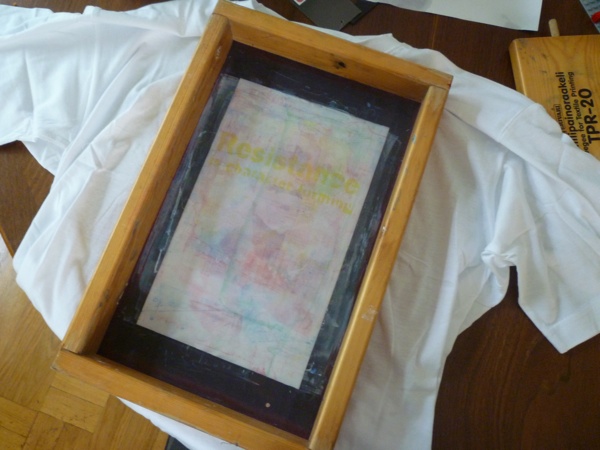 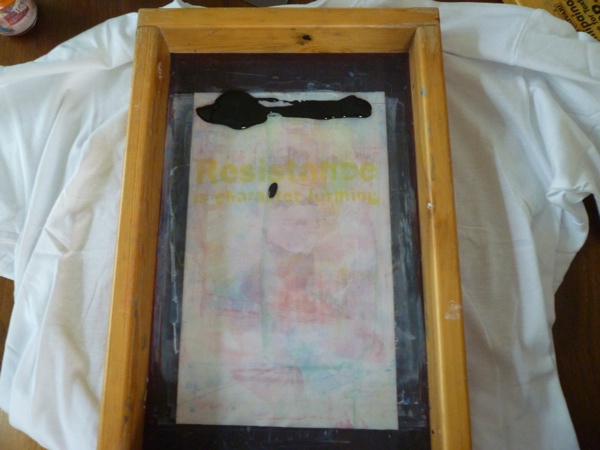 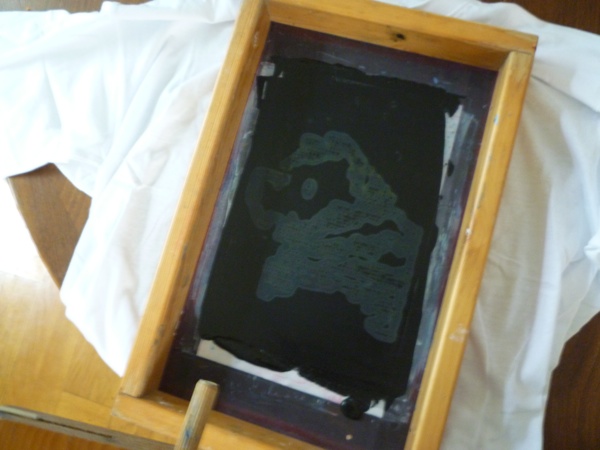 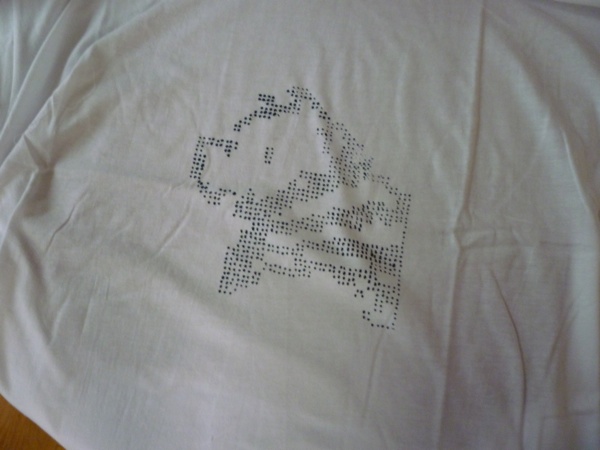 The conclusion is that the drill holes will probably work better if i drill them on a harder material, but that was just to painful to do with a small hand-held dremel. I could probably sand down the part’s of the holes that are more punchout’s then holes.

Anyway’s I’m gonna be sporting this here t-shirt later on when I’m with a few friends at Norbergfestival next weekend. I’ll see if I can find myself some motthapeggas there!

Me and Petter have been preparing for a gig at Norbergfestival’s openstage, we have this sofar: 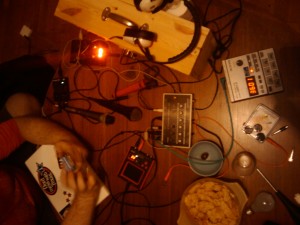 A few small additions to the live-rig, say like a circuit-bent delay pedal behind the drums and we’re golden!

yeah, I’ve been reading up on CNC-machines. Obsessed even. The way you can be before a big build.

So what are my findings?
There are a few (what it appears) good looking small mills, if you want to CNC PBS’s and the such. They are not big enough for what I want though.

what it came down to in the end was the CNC Toolworks 12″ machine and the Probotix v90, they are similar in price and they seem to have the same amount of good reviews.

They cost about the same although I could not get price for freight from amazon. I hope it’s not the same flat rate as they use on everything else, because that is expensive 🙂

Finally I’ve decided for the Probotix V90, and then came all the rest of the questions. How do hook it up to a computer, what computer, what os, what programs would you use to make stuff with it, can you add lasers to it etc etc.

More reading and testing, seems like there are 2 players when it comes to controlling your CNC, either it’s a free Linux program or a crippled windows program. I’d like to run on os x, but that was not an option.
So I virtualized and started both of them (not at the same time) and both of them where ugly and looked unintuitive.

Also neither can run from anything but a stationary PC (no laptop) what is this, the dark ages?

Fear not, I’ve come to a solution, I will buy the V90 from Probotix, but none of the (use your printer port stuff) and the motors and arduino-motor shields from the maker-bot store.

The makerbot has even a g-code (language to control the machine) interpreter.

I will have to make some programming, it wont be much cheaper. I will probably not be able to use the available windows programs, but I don’t care, not really.

I’m just gonna leave this video here for you to look at. 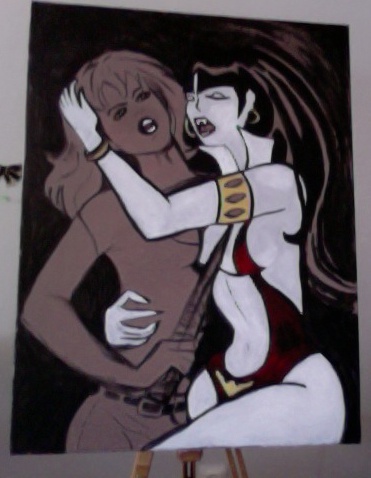