When I grew up skateboarding was 99% about getting the speed up to fail a trick. You had to step up on the skateboard and then wiggle back and forth to get the speed from standing still. It was dead hard, and boring, and one of the reasons that I never really did more then trying.
But the kids today just dont do that, they kick of with their feet or just pushes of into speed directly, why did we not think about that when I was young? What was our problem? Why did everyone do that? And it was not only Swedes, my friend Neal from UK had the exact same Epiphany.

So why am I talking about skateboarding? Well my kid sister Sofie’s boyfriend Love is starting up a skateboard production company called Red Wall Movement some more images here I decided to be a patron of the arts and get one.

Then I really had to dive into all the skateboarding things so I knew what I was getting, long story short, I’ve built 3 skateboards myself, one of them is burned up and will never be spoken of again. The other 2 are one for Tova and one for Lukas. They enjoy going downhill real fast.

This is Love’s board to the left, and the kids boards (that I made) in different forms of readiness. We’ve since painted them and attached wheels and so-forth.

I’ve also gotten a helmet. I look like a retard, but I can say that I want to be a good role-model for the kids, witch is sort of the truth, but I’m more afraid to get hurt.

Yes dear blogreaders, it is time again for a culinary blog-post.

I was introduced to the novel concept of preparing eggs in the micro-wave. Apparently all you have to do is oil the inside of a glass or eggcup, put the egg (without the shell) inside the glass and microwave it and it you would have a nice egg.

I thought I could do better.

So I added substituted the oil for bacon, it tasted great, although the short period I had the egg in the microwave did not make the bacon crisp. Some pre-preparation might be suitable to obtain that result. But I like non-crisp bacon, so it was a win for me.

Here are pictures of the dish: 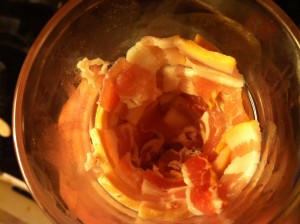 Applying sliced bacon to the sides of a glass. 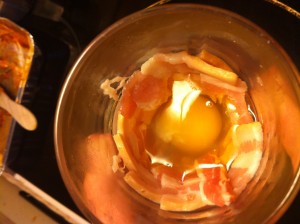 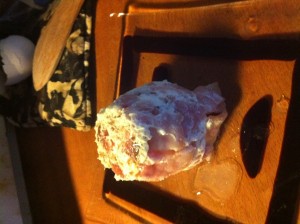 This is the result, upside down, on a glass plate. 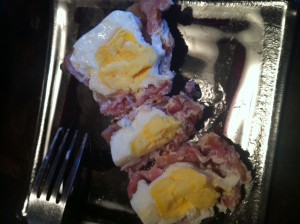 Sliced and ready for consumption!