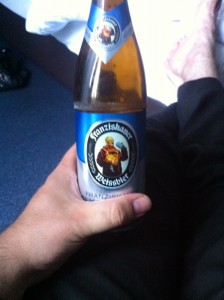 So me, the wife and the kids drove down to Berlin, Germany, Europe. We stayed at a shitty hotel that could have been nice, but the prostitutes and the rude staff kind of ruined it for us. Driving down was awesome. We took a lot of bridges and one boat. Berlin is a nice town to drive in. Everyone is super friendly and has lots of patience. Another thing you need is a sticker for your car that say it’s environmental. If you dont have it you might be fined 40 eur per day inside the city limits of Berlin. I did not get caught even once. Mohahaha. Also we took the u-bahn a lot. The U-Bahn is great. I wish we had one in Eslöv. The food in Berlin was wishy washy, until we found the gay-housing area two blocks from our hotel. There every restaurant where great. And there where no prostitutes there. We saw a lot of sights in Berlin. I was at the curry wurst museum. I like Curry-Wurst. I did not buy a single thing to circuit-bend or play on. But I got a super-ugly Hawaiian shirt at urban outfitters. And KaDeWe whoops every other shopping mall I’ve ever been to. My kids discovered crepes. They had a lot of them. I bought fabric made sauerkraut saft. Horay. I broke a phone at Starbucks at checkpoint-charlie. At least Starbucks is consistent in it’s coffe-making. The zoo we where at was nice, but the cages where to small. The first museum we went to was awesome. Wish I would remember it’s name. We also went to the zeppeling hangar that they built a tropical island inside. The name of the place is called tropical-island.de that was ok. but Staakow RULED.

2 thoughts on “Berlin, Germany, I was there.”